Set the Ball Rolling With These Exciting Party Icebreaker Games

Making guests comfortable at a party can be quite a task! Icebreakers are a way of introducing the guests to one another, and ensuring they have fun. Whether it is a corporate gathering or a new year party, PartyJoys has the perfect games for you. 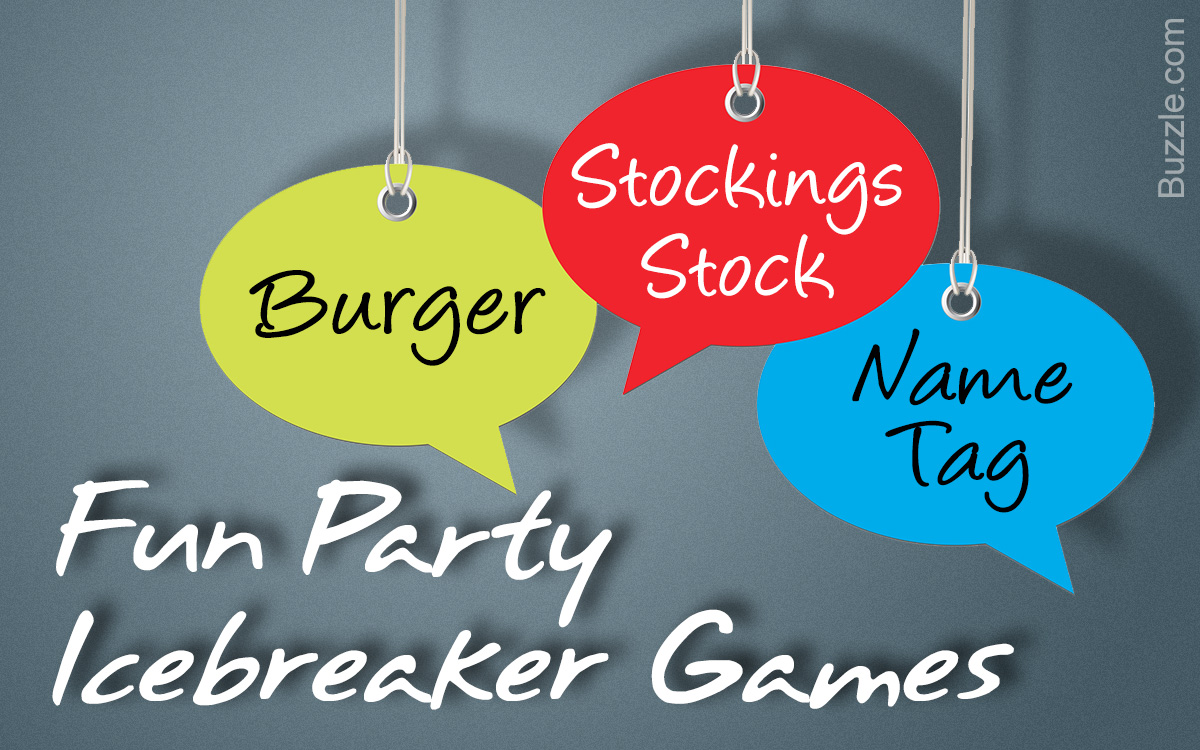 Making guests comfortable at a party can be quite a task! Icebreakers are a way of introducing the guests to one another, and ensuring they have fun. Whether it is a corporate gathering or a new year party, PartyJoys has the perfect games for you.

Simple and quick games that are played at a party to make the guests feel at ease, and also help them to get acquainted with one other are known as icebreaker games. They can be funny, silly, and at times even enlightening. The success of a party depends on the choice of these activities. Icebreaker games are party games introduced to liven up the party.

Icebreaker games are played at a corporate party, baby shower, Christmas party, New Year party, or a simple get-together. Both small and large groups find them interesting. Do consider the personality and the age-group of the guests before finalizing a certain activity.

Annual corporate gathering is a time when the families of the employees meet the friends and colleagues of their spouse. These days, corporate gatherings and corporate bashes are very much in vogue. Various party games and activities are incorporated to enliven the event. Icebreakers are used as a tool to help the people at the gathering settle down and be at ease.

At a corporate gathering, it may not be possible to include everyone in an icebreaker. The anchor could pick out people randomly. Here are a few ideas that you could use.

This game not only breaks the ice, but also introduces the concerned person to other guests. The invitee has to introduce himself/herself to the crowd using an adjective that begins with the first letter of the name. For instance, Jolly Jennifer, Fancy Fanny, Active Alice and so on.

This is a funny icebreaker where an ingredient of a burger written on an adhesive paper is stuck on the back of the participants. They have to rearrange themselves according to the correct order, in which a burger is made. This game is very exciting if played with two or more teams. This would also enlighten one on the concepts of team building.

In this icebreaker, the anchor randomly picks the guests. One guest would have to get the details of another guest he has never met before by asking random questions. However, avoid questions like “are you married?”, “how many children you have?” or any other sensitive questions. Instead, ask queries such as “how would you spend a perfect day?”, “the important thing you have inherited from your parents?”, “name of the book you are currently reading”, “last movie you saw with your friends?” and so on. The questions asked should be interesting, funny and humorous. At the end of the stipulated time, the guest would have to introduce the person whom he interviewed to the crowd.

As soon as a guest enters the venue, stick an adhesive paper on his back. Ask the people who saw him coming in, to write witty comments, or the first impression that he made on them as he walked in. Once the paper is totally filled, the person standing near him or her can read out the comments.

Christmas calls for celebrations and get-togethers. For some families, Christmas is a time when the entire family comes together for a family reunion.

This is one of the popular icebreaker games played in a Christmas party. This can be played either before or after a sumptuous Christmas dinner. As the guests come in, give them a slip of paper with a line of Christmas carol written on it. Once everyone is gathered, each person will sing the carol written on his paper to find the group he belongs to. This is one of the ways to form groups, and set the party in swing.

Give the guests a slip of paper with either a question or an answer written on it. The guest who has the slip with question has to ask the question until he comes across a person who has the answer on his slip. The person with the answer has to read out the answer and also introduce himself to the crowd.

New Year is the time when everyone makes new resolutions and promises. It is again a time to meet your family and friends. New Year party can be hosted on the New Year’s Day or on the eve, and definitely calls for games and various other activities.

Once the guests have gathered, you could randomly pick out people and ask them to find at least three people from among the guests who share their tastes and interests. Once, they have found three people with common interests ask them to find another three who have completely different or opposite kind of interests. Though this game starts as a scramble, it would help in forming groups. Each group speaks about their common interests and also about the members whose interests are exactly opposite to theirs.

As the guests arrive, ask them to write down their resolution on a piece of paper. Fold the paper and put it in the cookie jar. This New Year’s resolution could be a fake or a true one. Once all the guests have arrived, pass this jar around and each person should pick up a slip. Each one has to find the person who has written the resolution on the piece of paper he is carrying. This is fun because the guests have to mix and mingle with one another. Towards the end of the game, each one would read out his resolution.

It is awkward to walk into a party where you know very few people. To make the party exciting, the guests should be put at ease; hence it is important to have icebreaker activities to introduce the guests to one another. Remember to keep the icebreakers simple and entertaining.