Invitations for a Toga Party

A toga party is the perfect idea to play a grown-up's version of dress-up or a costume party. Find out here how you can send out interesting invitations for a toga party. 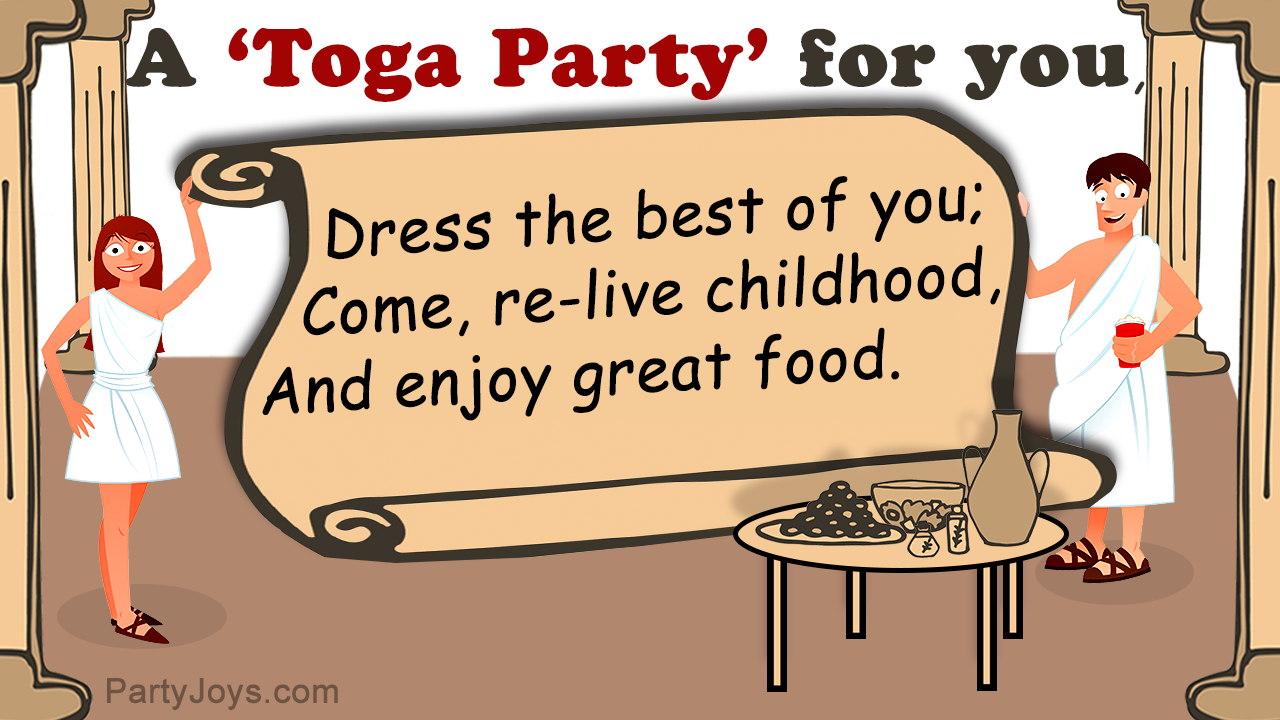 A toga party is the perfect idea to play a grown-up’s version of dress-up or a costume party. Find out here how you can send out interesting invitations for a toga party.

A toga is a clothing item that was commonly worn by ancient Roman people. A typical toga is usually about 20 feet long and is draped over the body to look like a loose gown. Togas were traditionally made of wool and were usually worn with a linen tunic underneath. A toga party gives grown-ups the perfect chance to visit their childhood again and play dress up. Getting ready for a toga party is a sure shot way to know you are going to have a good time ahead. Tonight’s gonna be a good night! However, if you are the host rather than the guest, then pull up your stockings; you have a lot of work to do. Any party is incomplete without an invitation. So spend an extra thought on the party invitation wording.

Now, a ‘toga’ party as such is nothing different from an ordinary party. The only difference is that it is a toga party, so guests would obviously be expected to turn up in a toga for the party. But what is the party about? Is it a toga birthday party? A toga anniversary party? Or simply a get-together with the theme ‘toga’? It is this that will control and guide the wording of your invitation, rather than it being a toga party. However, you can still include the ‘toga’ theme in the wording. Here are a few guidelines concerned with the toga party invitation wording that will kick start your brain and get the creativity flowing.

Before we begin, one common tip I want to give is – it would be a good idea to include a few lines about the ‘Toga’ theme overleaf the invitation. Not many people may know what a toga party is. At the same time they may not know where to find a toga or how to wear one. You can give them tips and instructions about the same as you elaborate on the ‘Toga’ theme.

Apart from the wording, the design of the invitation card can also carry the ‘toga’ theme. Basically togas were worn by Romans, so the card can carry symbolic patterns. For example, the hinge of the card maybe designed like a roman pillar. You can design the entire card to look like a Romanesque building. The card may carry the picture of a beautiful Roman couple wearing a toga and a stola. Another idea would be to depict relevant Roman Gods on your invitation card – like Bacchus (God of Wine), or Voluptas (God of Pleasure) etc. Finally, you could write in calligraphy with an ink pen nonetheless, on a hand-made paper, and roll it up like a scroll and tie it with a ribbon or golden thread!

So that should have you sorted about how to write a toga party invitation. Creating a party invitation is not as difficult as it might seem. Some final tips I would like to leave you with is – make sure to watch some movies like Troy and observe the actors and actresses, and go through some books on Roman culture so that you have a clearer idea about what a toga is and how it is worn. If you are going to get one stitched especially for the party, make sure you go to a good designer. Have a great time, and may Bacchus shower his blessings!